Since 1995, Preston Furlow has been making historically accurate reproductions of flags, as well as custom-made flags. Mostly creating flags for Civil War reenactments, Preston always focused on the detail and accuracy of banners flown by troops many years ago. He fought alongside reenactors, worked hard to preserve and protect monuments honoring southern heritage, and is widely known for the flags that drape coffins and fly across battlefields and at ceremonies. Some of the greatest honors of Preston’s flags are that they draped the coffins of a Confederate general, Confederate colonel, and an unknown sailor from the CSS Alabama. A couple famous customers were former Texas Governor Bill Clements and Mrs. Alberta Martin, the last living widow of a Confederate veteran.

Preston makes flags just as you want them. Each flag is unique, no two are the same. Each one is made for the pleasure of the customer.

Here are a few more famous examples of Preston’s work:

This flag, made by Preston, was present at the 150th anniversary of the inauguration of President Jefferson Davis.

Preston also made this flags, which are shown here at the Beauvoir Estate, President Jefferson Davis’ last home near Mobil, Alabama. 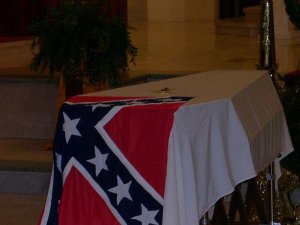 This beautiful Second National Flag, made by Preston, was draped on the coffin of the remains of an unknown Confederate sailor from the CSS Alabama.

Preston’s version of the Taylor flag. The fellow there is Jessy Taylor, Great Grandson of General Richard Taylor, the flag’s namesake.

6 responses to “About Us”